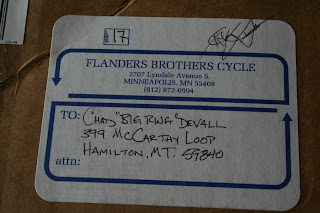 as mentioned below......goodies were found in MN. Fresh off the brown truck from the fine fellas over at Flanders Bros Cycling in Minneapolis.
Posted by Chaybo at 11:41 AM 1 comment: 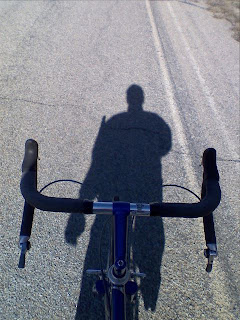 hooks me up again.....thanks mr. norton ! Yes, a confession....i have a problem when opportunities arise to purchase old bicycle parts that still look new. I just can't help myself.
first, it was a NOS ti Xizang a few years ago trading the frame in towards a new suspension fork and now a NOS 6" travel carbon dually. I have no idea at this point of what i'm going to do with it.....hang on to it till i have enough parts to build it up i suppose. Who knows. 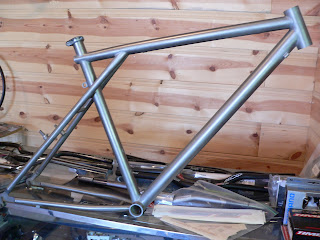 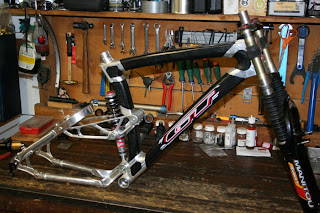 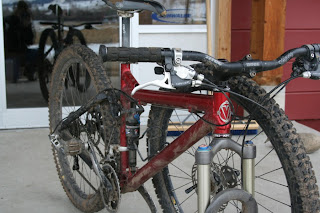 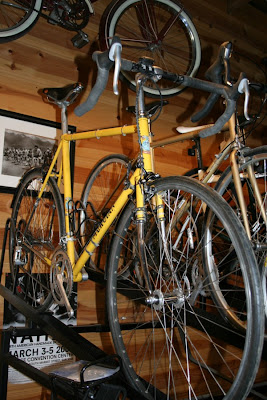 in for service....light overhaul of bottom bracket and headset bearings, new saddle, and fixing a seatpost that just wouldn't stay put.

lending a hand in helping Steve figure out the perfect stem size to go along with his new Ragley handlebar.....the stem sizer you see here is actually made over in Billings by the Bike Fit fellas, and it is easily the nicest stem sizer on the market. So if you're in the need for that just right position swing on by and try it on for size. Then if need be have a custom one-off stem made for the perfect position. Yeehaw !
Posted by Chaybo at 1:58 PM No comments:

First revealing of Johnny D's new SC Nomad.....no part was overlooked and budgets were thrown out of the window. Big fella J.D. just said "build me a bad-ass Nomad !" and so we obligued. Thanks for the fantastic project John, it was truely an honor to build a bike for you. 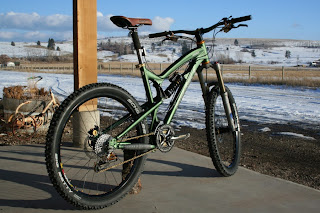