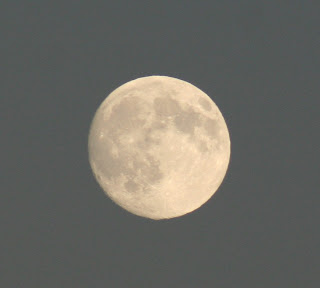 happy friday folks ! Anyone get any night rides in during the past couple of nights ???? If so, count me as being one of the jealous because here in Hamilton the sky was absolutely clear and the moon was extremelly bright, would have been just perfect night ride conditions. On the dirt roads last night i didn't need a light so i just plugged away at the pedals and took in the cool, crisp evening air with the aid of moon ray. Speaking of lights ..... anyone seen the LED Trinewt from Niterider ? If i were to purchase a new light right now i'd suppose it'd be the one to consider.

Thanks Rick for dropping of the new music today.... some ol' classics from Neil Young (massey hall 71'), goodness his voice sounds so young. I still need to pick up the Chrome Dreams II album, and i'd suggest you do the same if you like Neil.


Finally.....our Felt rep, Zach stopped into the shop today and we sat around and b-s'd about bikes for about 3 hours. Felt's bikes look outstanding for the 08' season and we're stoked to be selling their bikes. Their entire line looks to be very solid. They've added upon the full suspension line and added two more series of bikes....the 5.7" travel Compulsion line and the 6.5" travel Redemption line. Personally, the bike that i'd like to purchase from them this year....the XCity , which is a sweet little Shimano 8spd internal geared commuter or errand type bike that retails for $799. I just like the clean lines and simplistic looks of it and will have for myself soon enough. Zach also has with him some killer road bike eye candy, a Pinarello FP5 that retails for $3200.....for the money it looked very well equipped and we'll be considering adding pinarello to our line of bikes.

Thanks for stopping out Zach !

Carli over at Mavic also stopped out this past week and had more goodness stuffed into the back of her Volvo then should be allowed. Every wheel bag was better than the next and by the time that she left the shop we needed mops to wipe up the excess drool left on the floor. Thanks for coming on out Carli and for spreading the mavic goodness.

all for now, have a fantastic weekend folks !
Posted by Chaybo at 6:02 PM No comments: 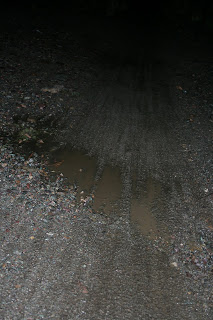 kind of a silly name for a CX race, but still i knew it would be an excellent event so i loaded up the kids, my good pal Rick and his son too as we headed up to Missoula on saturday night for the second annual cx race hosted by the U of M and under the lights of the Missoula Osprey baseball field. You couldn't ask for better conditions than the rain and 38d temps that we've been having for the past few days and it made for muddy and very slippery conditions come race time, perfect CX conditions. You can read up on Shauns blog for a better race recap than i could provide. Thanks Shaun for the fantastic evening entertainment !

pics of the mens A race 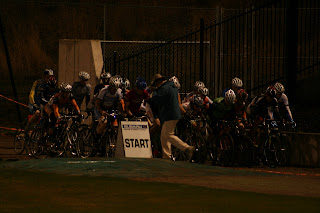 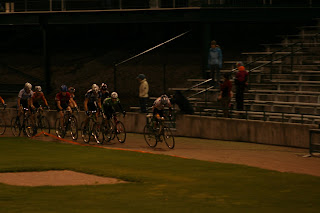 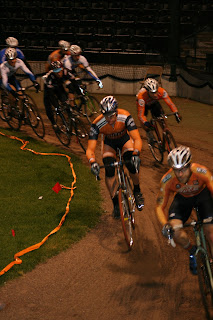 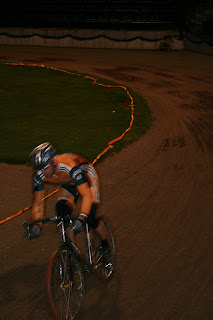 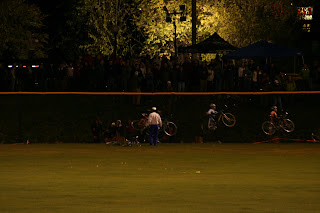 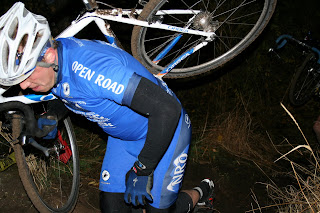 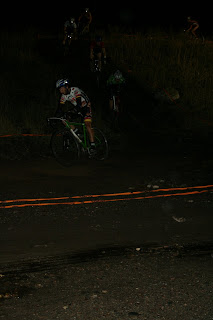 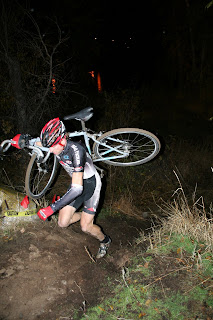 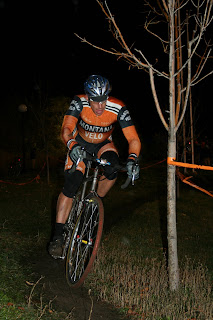 Posted by Chaybo at 9:34 PM No comments:

Loaded mtb touring (sounds fun doesn't it ?? )..... my plan is to build this 29er Rock Tour up as a shop bike and parked on the floor, hopefully it'll spark a customer into the desire of an off road touring bike. The tentative plan is to build it up with the new Shimano XT, Old Man Mountain racks, a set of handbuilt XT/DT-Swiss 7.1d wheels, Schwalbe Marathon tires, some Avid BB-7' brakes, a WTB dirt drop handlebar, and barcon type shifters. We'll keep ya posted as the project moves along. 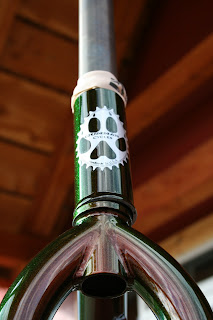 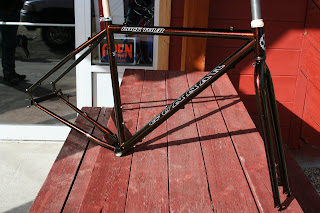 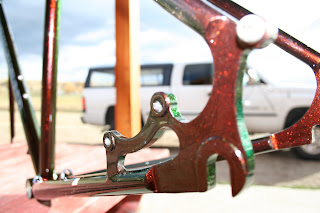 Posted by Chaybo at 2:15 PM No comments: 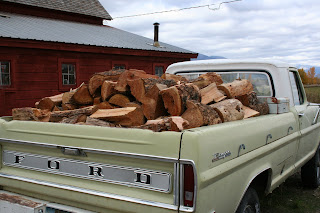 i suppose it's that time of year already. Time to stoke up the stove. High of 49d today.
Posted by Chaybo at 2:23 PM No comments:

we just recieved two Endorphin frames and thought we'd share a few pics. For those of you that aren't in the know...these are the long awaited framesets designed by the infamous and a gentlemen, Mr Noel Buckley. I'll tell you straight up that his frames are simply incredible. Solid designs built to take a whopin'.
5.5" of travel at 7.8 pound

Posted by Chaybo at 4:24 PM No comments: 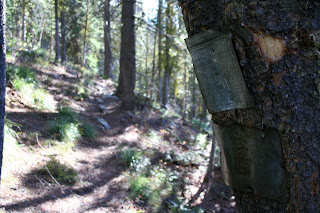 sign-in sheet
Posted by Chaybo at 3:15 PM No comments:

DIY switchbacks...but with snow, and lots of exposure. 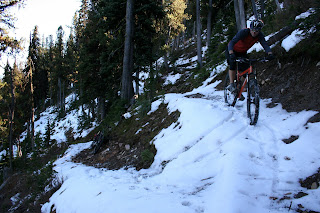 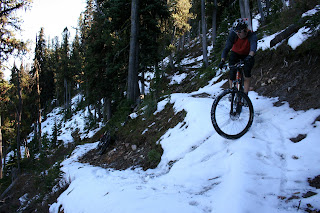 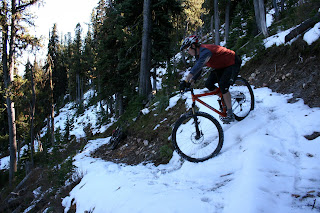 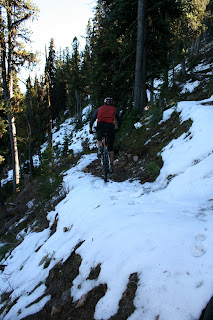 This lesson was brought to you by-JP.
Posted by Chaybo at 6:51 PM No comments: 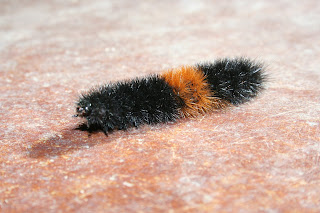 Chicken Crit recap and final results. Well, it's been a few days since my last entry and it's not because i've been avoiding the blog. It seems that we've had a little spurt in the action at the shop here and folks have been coming in to visit and to get their last doses of riding before the snow settles in for the long haul. Today alone we had visitors from Missoula, Great Falls and someone passing thru from california and actually bike shopping in Montana (sounded kinda bizarre to me too ), but anyway during the last few days it's allowed the fun to sink in from last weekend. The Chicken Crit, in it's second year of carnation has been embraced and we'll certainly have a third if you all would be kind enough to come back again. What is the CC ?? Well very basically it's an end of the year celebration and a party with the same company who we spent lots of time out on the trails this past year with. We grilled, fried , and baked just about every type of meat plate you could imagine. We drank great local beer, and some not so local Tequila (Mag, thanks for making the margaritas) . We sat around and enjoyed damn good conversation, which VARIED greatly dependeding on which circle of friends you stumbled into. We also had a slide show that highlighted 2007 in review....lots of new trails were ridden and new friendships were made along the way. The chicken crit is my way of bringing all of these good folks together and saying " thanks for the g-times". And then.....finally .....to cap off the evening we have adults on tyke bikes racing for glory and pride. A pretty damn good night by my own personal definitions.

and finally....the result (time penalties assessed...yes you brother George, you drip and the time gets nipped)
1. A Riley
2. Chaybo
3. Brother George
4. No-way T-Buhl
5. Walt finely representing the tues night brethren
Wmns catagory we had two fearless females take the plate and it was a close race for sure.
1. TD
2. Sassie Cassie has some fine a#$ boots
and finally...in the b-day suit division
1. and much to the surprise of us all
2. No way T-Buhl who kept a little something- something extra left in his reserves
3. Brother George
4. and last but not least, inspiration for the newly added catagory, L Physer.
Posted by Chaybo at 6:44 PM No comments:

It's midnight....i'm flippin' tired, g'night. but here's a few crazy pics from the 2nd Annual CCC for your enjoyment:

a disaster in the making


the Turner Highlines are starting to ship, we waited in a long line to recieve ours and it was well worth the wait. We've already spent the entire morning pouring over the details. Just so many pass over, such detail. Turner really created a beautiful 7.1" travel, 10.65 pound frame. 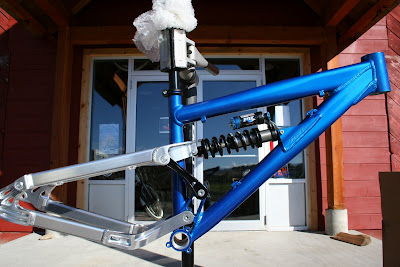 intricate cnc'd detail, a 12 X 150 rear axle...check out the built in derailleur hanger.

Welp, we're back from Interbike and all i can say is .......uuggghhhhh, i'm tired. We Flew out of Missoula at 10am and didn't arrive to Vegas till well after 3pm on thursday afternoon, ended up missing a bunch of meetings and missed out on whiskey shots at the Knolly booth. Supposedly our flight was delayed because Cheney was flying into vegas and security made us do loops hovering the city for over an hour.
Vegas urban sprawl

We had a blast reviewing the 2008 products and we're happy to be dealing with our current line up of manufacturers because once again each and every one of them have made slight changes that will undoubtedly strengthen their product line. Felt has once again increased their line of mtb and townie type bikes, and plus their cruisers rule (after all they do make the New Belgium Fat Tired Cruiser).

Dt-swiss and the Hayes group made big changes this year by adding suspension lines. Dt-swiss purchased the popular UK brand of suspension forks....PACE. Their new forks will be highly priced and majorly weight focused; Hayes may have hit a home run on their new in-house 29er fork, and judging by the amount of manufacturers that had the fork on their bikes it appears that they are well on their way. The Phil Wood stainless BB cups were also pretty damn cool.

650b bikes were also sparingly present, and it'll be very interesting to see how well the industry accepts yet another wheel diameter. The Rawland was probably my favorite if i were to vote.

Here's a look at the Ventana booth.....Alan was present and helped Teresa and Sherwood out. Ventana's product remains relatively unchanged and just some subtle refinements. Their new bearing tool kit is available too.

We brought home with us from the show a Gunnar Rock Tour with 29" wheels that will be a dedicated off road tour bike with drop bars.....just for those back country forest service roads. Should be nice. Here's a picture of the new Waterford road fork crown:


and then of course we had a damn good time watching the World Championship criterium held downtown on the strip and at night. The crowds were massive and most folks were standing 3-4 rows deep. The speeds that the pro's were going was just incredible and the cash primes were huge which motivated the racers to ride all out which eventually spurred a ton of crashes. We saw 6 seperate crashes within an hour of racing ! we tried hard to twist Sherwoods arm into going with us, but neither he, Alan, or Teresa had any interest in hanging out till past midnight and getting caught up in the skinny tired chaos.

and then finally speaking of chaos....the party and the company of many familiar faces. Vegas wouldn't be Vegas unless you went at it with intentions of self bodily harm.

Posted by Chaybo at 1:27 PM No comments: